No Result
View All Result
Home Science and Technology Health

The Magic of Mushrooms

How anti-cancer mushrooms have become the driving force behind integrated medicine.

by Tilly Bean
in Health, Lifestyle, Science and Technology
0 0
A A
0
0
SHARES
28
VIEWS
Share on FacebookShare on TwitterShare on LinkedinShare via Email

Homeopathy and medical science are thought to be worlds apart. One focusses on the power of plants to heal, the other focusses on using lab created pills and solutions for illnesses. The idea that these two forms of treatment could be integrated could seem too futuristic, but it’s happening sooner than you may think. 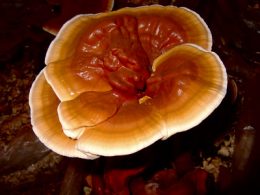 “Reishi is like a wood, it’s a really hard fungus.” © Wendell Smith via Flikr

Something that has helped this process of integration is the humble mushroom. Research in the last 10 years has been conducted into how some types of mushrooms can be used alongside cancer treatments like radiotherapy and chemotherapy, to improve a patients’ chances of recovering. In these types of studies patients who took medicinal mushrooms, like Reishi, had tumours decrease in size.

Louisa Habgood is a homeopath and acupuncturist who practices all things Chinese medicine. She says: “The Chinese have been using medicinal mushrooms for 4,000 years and there’s an enormous amount of healing strategies for cancer using medicinal mushrooms. Reishi, shiitake, lion’s mane, cordyceps, maitake – all of them are used for cancer therapy. It’s a bit of a grey area for alternative treatments for cancer because I’m not allowed to say that Reishi cures cancer, but it can be used alongside your chemotherapy as a complimentary therapy.”

Reishi mushrooms are the mushrooms most studied for anti-cancer properties as well as others. Ms Habgood says: “In china it’s called the mushroom of immortality and enlightenment, Reishi is a prized mushroom because it’s got so many incredible qualities. I’ve known people that have taken it for three years consecutively at the beginning of hay fever season and have never suffered from hay fever after that.”

Ms Habgood says this is because Reishi particularly targets the liver. In Chinese medicine the liver is the hub of cleanliness and detoxication. “Allergies are a good example of this, I see a lot of people in practice who have allergies, and they’ll have an underlying condition in their liver. It can be from drinking, it could be inherited, or from taking loads of medication that weakens the liver. When you clear the liver with Reishi you can then sort out the hay fever, for example. The liver is the main organ of detoxication, if it’s clogged then it’s not filtering out the toxins. If they’re not being filtered, they accumulate in your body. If your liver is super healthy it’s rare that you’ll have other conditions.”

The role of the liver does seem to be very important. In one Chinese study in 2008, polysaccharides (glucose enzymes) from Shiitake mushrooms were given to patients with liver cancer who were receiving chemotherapy, radiotherapy and both. The shrinkage rates for either chemo or radiotherapy were around 50% when used alongside the polysaccharide.

One UK based laboratory that is studying how mushrooms can be used to as treatment is the Mycology Research Laboratory (MRL). MRL study the effects of certain enzymes – those that prevent oxidative stress (imbalance of oxygen production and accumulation), inhibit cell growth, and those that detoxify.

Dr William Ahern, founder and managing director, said they are “focused on the clinical development of the biomass form of mushrooms (mushroom nutrition) rather than on the extracted form (medicinal mushrooms).”

So, what is it about these mushrooms on a molecular level that make them so special? Dr Ahern explains: “Reishi delivers beta-glucans (extract) that support the immune system and or by enzymes that also support the immune system. Reishi reduces inflammation if taken on a regular basis. Cancer is a complex situation, but there is a consensus that the reduction of inflammation has beneficial effects in these situations. A cancer patient must inform their consultant when supplementing with Reishi.  Chances are the consultant will suggest continuing the supplementation only before and only after the standard cancer protocol is being implemented.” 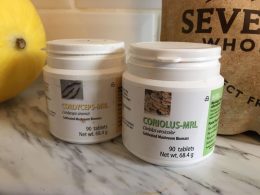 Studies such as those conducted by MRL and around the world are part of what is called integrated medicine. This is the integration of medical science with homeopathy. There are so many different ways to incorporate medicinal mushrooms into a person’s routine, but they can’t be used like mushrooms from a supermarket – you can’t put them in a risotto or a sauce. Louisa says: “Reishi is like a wood, it’s a really hard fungus with a shiny top. You would have to powder it or make it into a tincture, it’s not like a nutritional mushroom in that it can used like a food.” 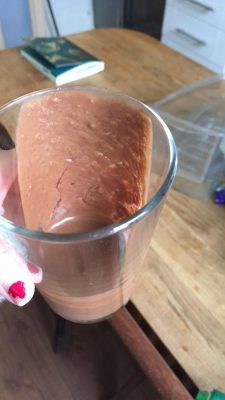 So where does the future lie for integrated medicine? Louisa thinks there’s a long way to go: “You probably see when you go to a hospital, patients are served food that isn’t really nutritionally viable. The food is denatured in a way, really poor quality and not fresh. It’s not full of vital energy.

She continues: “There’s a mechanistic view that they body is a machine, but we are from the earth and the energy we get is from the earth and the food we eat. So, the quality of the food needs to be full of that vital energy. In the future, because there’s so much research, maybe there will be an opportunity to integrate all this incredible wisdom we have into mainstream practices. But at the moment they are worlds apart.”

Traditional medicine got us to a point where medical science took over. Maybe traditional methods will be the answer to further advancement into new territory.

Anxious and Depressed: Women with Learning Differences share the agony caused by a Late Diagnosis

The NHS hospital waiting list is almost 200 times higher than pre-pandemic with one in ten people in England waiting...

A historic estate in Lincolnshire is planting a 70-acre wood to celebrate Queen Elizabeth II’s 70-year reign. Burghley House has...

Anxious and Depressed: Women with Learning Differences share the agony caused by a Late Diagnosis