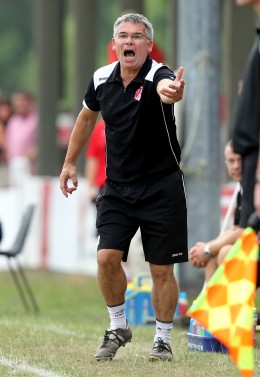 The club have announced that due to ‘work and personal commitments’ Wilson has decided to step down after an impressive seven year tenure at the club.

In that time he led the club to an FA Cup semi final in 2008, and most recently a top four finish in the league last season.
In a statement on the clubs website, CEO Luke Negus-Hill personally thanked Wilson for his time effort during his time at the club. He said:

“The last year has been a very important period in the history of this club, and that has been down in no small part to Rod Wilson.”

“I would personally like to thank Rod for all of the commitment he has shown, and where he has taken us. I know that we are all incredibly proud of what we have achieved in such a small time period”.

It did not take long for the Lady Imps to find a replacement though, with former manager Glen Harris making a return to the managerial hot-seat, after he vacated the position in 2004.

The new man will already know the current squad better than most, after being Wilson’s right hand man since he handed over the reins. In particular, his knowledge of the club’s number seven and former captain could prove important, considering she is his eldest daughter, Megan.

Negus-Hill admits that it was Harris’ previous experience and familiarity of the squad that played a large part in forming his decision to offer him the job.

“Glen’s knowledge of the club and players is something that we believe will ensure continuity for Lincoln Ladies as a whole.
“We are more than confident that Glen can build upon the foundations that were laid last season, as we prepare for the new FA WSL season in 2012.”

Lady Imps fans will have to wait almost seven months before they can see what sort of affect this will have on the team though, as the new season does not start until April next year.

Lincoln welcomes back rowers after 2 years of COVID frustration