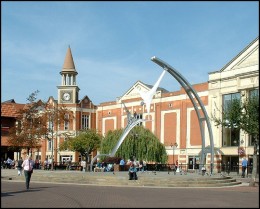 Lincolnshire’s very own waterside Shopping centre will be celebrating a milestone birthday this month with it’s 20th anniversary. The centre is hosting many activities throughout March in preparation for it’s final celebration on the 17th.

The centre, which opened in March 1992, has stood in the centre of the city on the high street and has atrracted many visitors a year.
Chantelled Henderson, an administrator from the Waterside explained, “the waterside has been a vital part to Lincoln’s economy. We have had our hard years, but we’ve made it through and continued to persevere for the benefit of the community.”
The shopping centre hopes to continue to thrive to prosper lincoln for many years to come.
WATERSIDE_JACKSON_CITYVIBE_1700
Previous Post

The City of Lincoln Council is proposing the introduction of 15 new CCTV cameras around the city as one way...